WHAT IS SLED HOCKEY

Sled hockey (known as sled hockey in the United States) is a sport that was designed to allow participants who have a physical disability to play the game of ice hockey. Ice sled hockey was invented in the early 1960s in Stockholm, Sweden, at a rehabilitation center. It is currently one of the most popular sports in the Paralympic Games.

Sled Hockey started early in 2000 in Austin and Dallas.  Today, there are programs in Austin, Dallas, Houston and San Antonio. 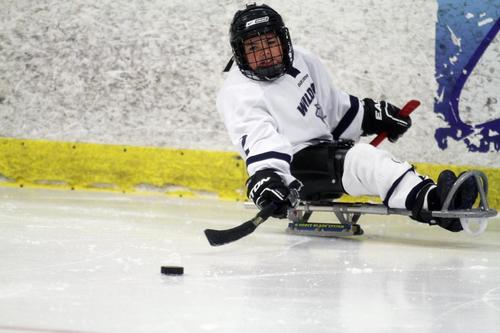 Essentially all of the regular ice hockey rules in able-bodied ice hockey leagues apply to ice sledge hockey. The differences are those necessitated by the ice sledge and the athlete. The first set of international rules was created in 1990 and was drafted from Canadian rules. The only rule unique to sledge hockey is Teeing-charging an opponent using any part of the front radius of the sled.

All players are required to have their ice sledge hockey equipment follow the standard that has been set by HECC (the Hockey Equipment Certification Council) Inc., including their sledges, sticks, helmet, skates (if applicable), and other protective gear. The sticks for ice sledge hockey players have a blade curved at one end in a manner similar to regular ice hockey, and generally six to eight metal teeth at the opposite end of the blade for manoeuvring and propulsion. Movement is achieved by using the metal teeth as a means to grip the ice and push oneself forward. The metal teeth cannot be too pointy nor protrude farther than 1 cm beyond the stick, to prevent damage to the ice or injury of other players. 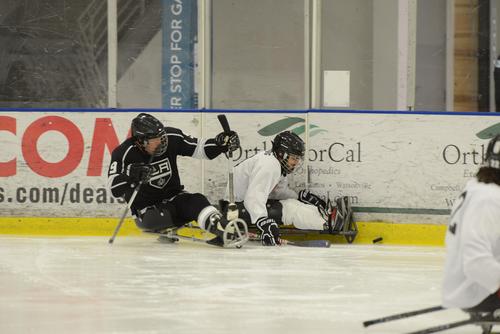